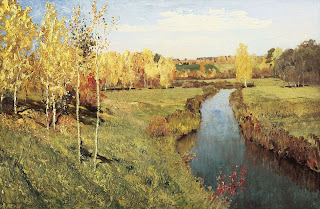 Isaac Ilyich LevitanAugust 30, 1860 - July 22 August 4 new style, 1900Was a classical Russian landscape painter who advanced the genre of the mood landscape.Isaac Levitan was born in a shtetl of Kybartai, Kaunas region, Lithuania, into a poor but educated Jewish family. His father Elyashiv Levitan was the son of a rabbi, completed a Yeshiva and was self-educated. He taught German and French in Kaunas and later worked as a translator at a railway bridge construction for a French building company. At the beginning of 1870 the Levitan family moved to Moscow.In September 1873, Isaac Levitan entered the Moscow School of Painting, Sculpture and Architecture where his older brother Avel had already studied for two years. After a year in the copying class Isaac transferred into a naturalistic class, and soon thereafter into a landscape class. Levitan's teachers were the famous Savrasov, V.G. Perov and V.D. Polenov. For his successes at school, Levitan was awarded a box of paints and two dozen brushes.[citation needed]In 1875, his mother died, and his father fell seriously ill and became unable to support four children; he died in 1879. The family slipped into abject poverty. As patronage for Levitan's talent and achievements and to keep him in the school, he was given a scholarship.
-------------------------------------------------------------------------------------------------
This picture describes the width Russian nature, shows only advantages, the deep of colours.
Posted by JUNG WOO PARK at 2:27 AM